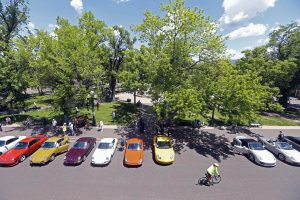 Gazing through the floor-to-ceiling glass walls of Albuquerque’s Porsche dealership, 84-year-old Brian Redman went zero to 60 down memory lane when asked about the cars that made him one of the 20th century’s top international racing legends.

“Used to be a time,” he said, using a wrinkled index finger to brush aside a wayward strand of snow-white hair as he looked toward a row of modern streetcars shining in the sun, “when you would sit behind the wheel of one of these machines and feel the car working with you. Ahhh, time changes a great many things about the cars we drive, sometimes not always for the betterment of the driver who likes to feel things.”

Those cars — Porsches of all types, he said — come with so many mechanical bells and whistles that they’re practically high-performance computers with exhaust pipes. They’re a proverbial light year beyond of the dangerous and sometimes unsafe rides he (and dozens of others like him) used to gain international stardom a half-century ago.

“The cars I once raced, they required a feel for the beast and everything they offered,” he said. “Now they have so many devices in them that they do all the thinking for you, devices that control slippage and throttle and even steering. Sometimes they don’t allow you to do the things your mind is telling the car to do. I ask you: Where’s the fun in that?”

Personal taste aside, there’s no disputing what the Porsche brand has come to mean for the collective consciousness of the car-loving public. It represents speed and power, social status and, most of all, prestige. 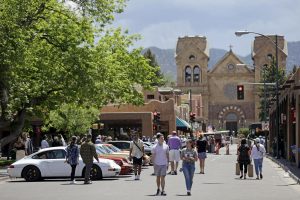 “Owning a Porsche changed my life,” said Santa Fe’s John Paul Gonzales, one of the organizers of Fiesta New Mexico 2021, a four-day event brought to the City Different by the Roadrunner Region of the Porsche Club of America. “I think you’ll get that same answer from anyone you speak with.”

This year’s event, which began Thursday and ends Sunday, has been an overwhelming success. Not given the green light by city leaders until two weeks before it launched, it was the first public mass-gathering event Santa Fe has had since the coronavirus pandemic shut things down 16 months ago.

Gonzales said it’s a reminder of how Santa Fe can be at the forefront of activities that bring a community together and give people a chance to celebrate the things that allow a COVID-19-weary world to move closer to normal.

“It just feels good to be doing something again,” he said.

The event brought together Porsche enthusiasts from as far away as Maryland and Wisconsin, drawing dozens of regional interest from Texas, Colorado and Arizona, and more than 100 members from New Mexico alone. The event sold out of all 65 rooms it was allotted at La Fonda, and banquets scheduled for Saturday and Sunday night were sold out long in advance. 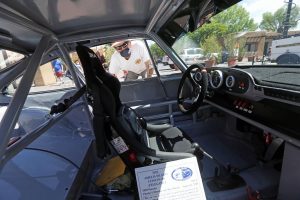 “It’s been just a delightful experience,” said Santa Fe’s Charles Mendez, one of the event’s main organizers and himself an international racing star.

He and Redman teamed up to win the 12 Hours of Sebring in a Porsche 935 in the 1978 race. Over the years, Mendez has owned or raced more than dozen Porsche models, one of which he showcased during the event. That same car is one he rolled into the Plaza for the Concours d’Elegance on Friday.

“The people who own Porsches, the people who fall in love with them, they’re the type who remain loyal to the brand for a lifetime and gladly pass it along to the generation that follows them,” Mendez said. “Every one I’ve owned I remember fondly, even those first models that are nowhere near the kind of streetcars you find out here today.”

Approximately 100 Porsches parked at various points in the Plaza on Friday morning, giving passersby a chance to peek inside and view some of the classic and ultra-modern cars whose manufacturer has earned the respect and adoration of millions worldwide.

Gonzales was one of those whose personal ride was out there. For months, he and Mendez joined a group of other Porsche enthusiasts to bring the event back from the dead and use it as a way to breathe some life back into their home town.

“It took so much work from literally dozens and dozens of people to pull this off,” Gonzales said. “Porsche people, they’re can-do personality types. To see it all come together and make this possible, yeah, it’s amazing.” 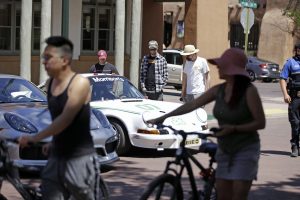 One of the marquee gets was the guest appearances of Redman and fellow endurance racing legends David Hobbs and David Cowart. The three sat at a table at the Albuquerque Porsche showroom signing a custom poster that featured a commemorative painting by renowned artist Karen Barrow.

Club members had a chance to purchase one of the posters and have the three men add a personal autograph while sharing a story or two about the good old days.

In that regard, Redman stole the show. The native Englishman strolled down memory lane with run-ins with open-wheel racing legends like Mario Andretti and the Unsers, Bobby and Al Sr. He’d never met Bobby Unser until a post-race incident in the early ’70s, a race where Redman qualified eighth but used an aggressive move to dip low in a turn late in the race to shoot past Unser and to get the win.

“He says, ‘Redman, what the hell you doing passing me on the inside like that?’ ” Redman recalled. “I told him he left me room. He thought about it, then asked me if that’s the way us road-racers do it. All I said was, ‘Well, yeah.’ He looked in my eye for a few seconds and said, ‘OK, now I know.’ I believe he won a few races from that point on. We became good friends.”

And friendships, Redman added, are one of the many things that clubs like the one who took over Santa Fe for the event, are all about.

“It’s quite remarkable to think that a car company can bring so many people together,” he said. “You think of the brands out there and Porsche, it’s a name that speaks for itself.”