How much collector-car storage is too much for Santa Fe?

Tom Linton, an owner of six Porsche 911 cars, has asked that of himself since he started building car storage units in 1998 near the Santa Fe Regional Airport.

“I always think, what is the saturation point for car storage in Santa Fe?” Linton said. “Every time I build one, it fills up.”

He now is renting storage space to 49 tenants with 62 cars at 7508 Avenger Way and 7511 and 7515 Mallard Way in the Santa Fe Airport Business Park. Most of the vehicles are BMWs, Chevy Corvettes, Alfa Romeos, Porsches and Ferraris. 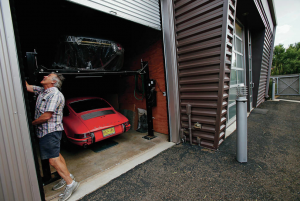 There’s “no Maserati right now, but a Lamborghini, I do have one coming,” he said.

“Correct,” Linton said. “I had to call it something.”

Each of his prior three projects started as car storage but quickly became a mix of cars and other types of storage.

“The Motorplex [7515 Mallard], I thought would be all autos,” Linton said. “Some of the buildings have been used for other things.”

Linton is still wondering who the tenants and buyers of the new 7414 Mallard complex will be. He typically rents to car storage customers and sells the remaining units and buildings.

He developed each property through a different limited liability corporation but markets them all through his business, Collector Cars of Santa Fe.

Linton built his first car storage building in 1998 primarily because he had four cars — including two Porsches — at the time and only a two-car garage at home. This 7,000-square-foot building has 26 storage units.

The complex under construction is next door to La Carrera Garage on Gooney Bird Way, which specializes in Porsches and other European cars in an expanding European car repair cluster among Linton’s storage units.

Noah Zimmerman will open an Audi/Volkswagen mechanic shop in 1,000 square feet of Linton’s 7508 Avenger complex, and Ian’s Garage, which specializes in BMWs, will move from Rufina Street to a newly built garage at 7501 Gooney Bird Way in September.

It gives car enthusiasts a chance to fix and store their high-end European vehicles in the Mallard-Avenger-Gooney Bird quadrant.

“It sort of creates a whole neighborhood of car enthusiasts,” Linton said.